The different terpenes in Cannabis and CBD

person Posted By: Patrick B. list In: Information about CBD / Cannabis favorite Hit: 1744

You may have heard of it, but do you know what a terpene is? They are found in a whole host of plants and other living organisms, including cannabis. In this article, we'll explain what they're used for and why they're just as important as CBD and THC.

As you probably already know, the cannabis plant is made up of several elements. First of all, there are the many cannabinoids, the best known of which are THC and CBD. But they are not the only ones, today they are going to be stolen a bit of the limelight by molecules found in hemp but not only: the terpenes. These are small odoriferous molecules, which means that they give their smell and flavor to different varieties of cannabis, but also to many other plants.

Terpenes can be found everywhere, and like cannabinoids, there is a whole range of different kinds with different effects. They are basically a defence for plants and trees, but also a way to attract bees so that flowers can be pollinated. Have you ever heard of forest baths? When you go for a walk in the forest to relax and clear your mind, this is called a forest bath. When you do this you will smell different scents and aromas, created by the terpenes present in the surrounding plants, which will have a beneficial effect on your emotional and physical health !

In hemp, these molecules work together with cannabinoids to give an entourage effect. In short, the different elements of the plant act together to counteract or enhance certain effects of other substances. This is why it is generally better to use full spectrum CBD oils in order to benefit from all the advantages of the different elements present in the plant. If you want to know more about the entourage effect, read our article on this subject. 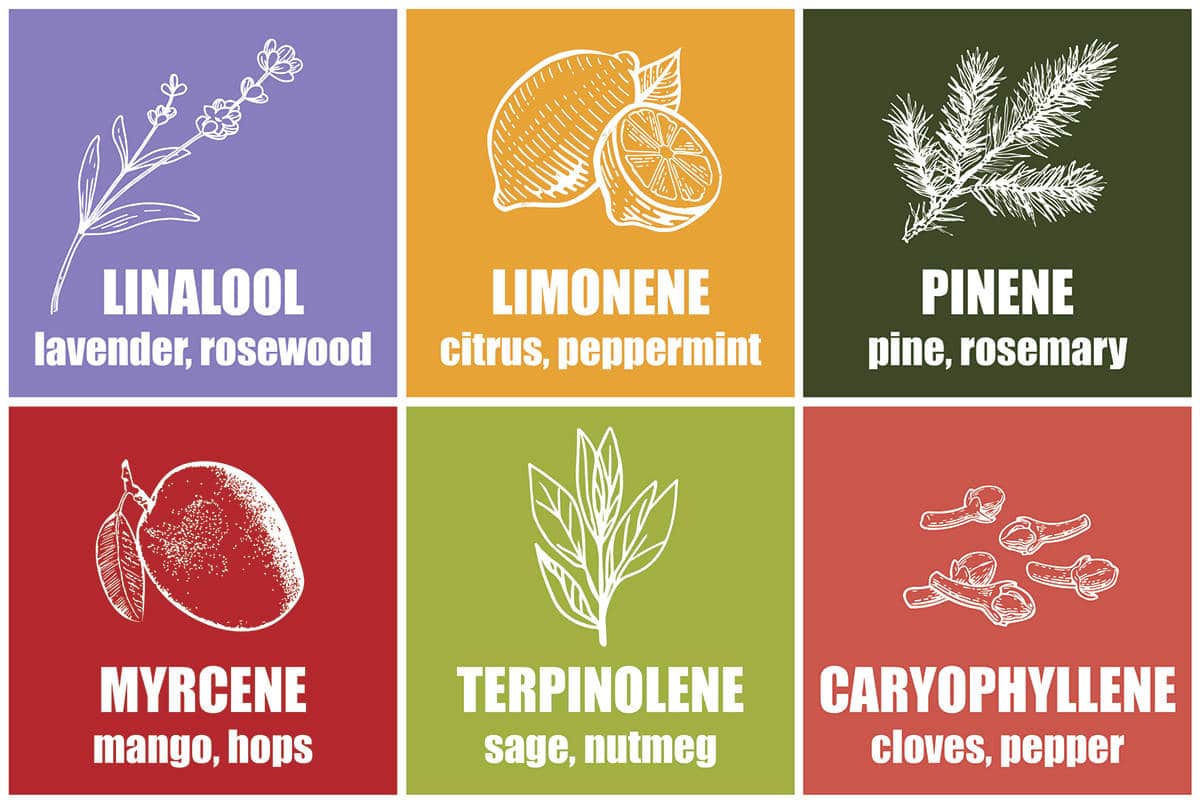 The main terpenes in Cannabis and CBD

Let's get to the heart of the matter and take a look at the main terpenes that can be found in cannabis and their different effects.

Lavender is both a beautiful flower and a bewitching fragrance. Lavender owes its smell and aroma to linalool. It is a terpene that can also be found in laurel or mint. This terpene has been used for centuries in various cosmetic and household products for its fragrance. Research on the subject has shown that it has a relaxing, anti-anxiety and anti-inflammatory effect. It also strengthens the immune system, and promotes the restoration of cognitive functions (could be used in the treatment of Alzheimer's for example) and of the skin.

It is the terpene most often found in cannabis but also in hops. An earthy taste with a hint of grape and spice, an aroma that can be found in the Black Widow for example. The taste may remind you of cloves. It helps our body to absorb the different cannabinoids, thus increasing their effects. It also has anti-inflammatory, antibacterial, antitumour and analgesic properties.

What aroma can you expect from limonene, the second most common terpene found in hemp? A citrus aroma, like the lemon aroma you can find in the Lemon Gelato. This terpene is found in many citrus fruits but also in rosemary and peppermint. It is an antifungal, antibacterial, anti-anxiety and anti-depressant agent, and is also said to help you concentrate better while providing a general feeling of well-being. Ideal for refocusing on work or studies.

One wonders what kind of aroma this terpene might have. As its name suggests, it is a terpene that is often found in pines, firs and other conifers. I don't need to draw you a picture, its aroma will undoubtedly remind you of your walks in the forest. It is also found in sage, rosemary and the Floki. Its effects are as follows: Anti-inflammatory, antibacterial, local antiseptic, anticancer, it also helps to dilate the airways and thus open them up better, which could help fight asthma.

The taste and aroma of pepper is what you can expect with this terpene. It will bring a pleasant woody and spicy taste to your taste buds. It is also found in black pepper and cloves. It is an antifungal, antioxidant, an effective anti-inflammatory for both local and chronic pain, and also helps to combat anxiety and depression.

Like myrcene, this terpene is well known to brewers. While myrcene is found in hops, humulene is the one that gives beer its hoppy and refreshing taste. Humulene has been used for centuries in Chinese medicine as a natural sedative and antibiotic, and is found in ginger and ginseng, among other things. It is also antibacterial and antimicrobial, anticancer, anti-inflammatory and anorectic (or appetite suppressant to put it simply). 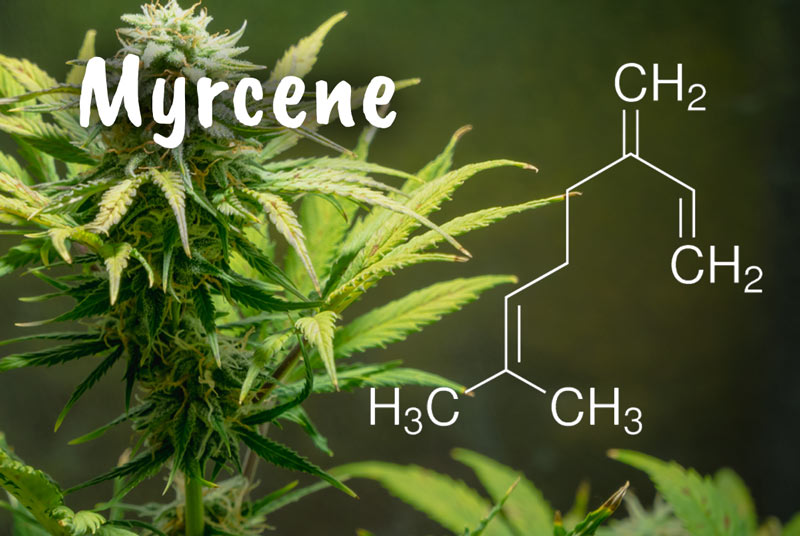 The effectiveness of terpenes in Cannabis

So, we have just reviewed 6 of the main terpenes that can be found in cannabis. Each of them has interesting effects, but it is when combined with other terpenes and cannabinoids that they show their power the most, by combining them to increase their efficiency and/or reduce undesirable effects, such as the stupefying and soaring effect of THC. It should also be remembered that, as with cannabinoids, there are many more than the 6 we have described in this article. Each terpene has its own characteristics, and the number of terpenes opens the door to an astronomical number of possible combinations whose different effects should be studied.

Scientists still have more than enough work to do before they can unravel the many mysteries and possibilities that lie at the heart of the cannabis plant. If you liked this article, don't hesitate to visit ourblog to read other texts based on the world of hemp, or to discover our numerous varieties of flowers to smoke as well as our range of oils and cosmetic products based on hemp, cultivated in permaculture in the heart of the Valaisan Alps in Switzerland !

- Why grow Cannabis and CBD at altitude ?